Posted by petebuchwald on December 4, 2011
Posted in: Uncategorized. 2 Comments

In the news!   Creative use of sine waves in medical technology.   Can we identify the resonant frequency of a cancer cell and then destroy the cell if we blast it with that frequency??

The vocoder was initially developed by our friends at Bell Labs in the 1930’s for enhancing telephone speech, particularly for long-distance calls.   This is not the only time Bell Labs has helped provide us audio engineers with technology we use!   They were very instrumental in the development of digital audio technology.

The patent for the vocoder was filed by Homer Dudley in 1939 and was introduced to the public shortly after that at the New York World’s Fair.    The technology was integrated into the SIGSALY communications computer used by the US in World War II.   The SIGSALY was a machine that scrambled the communications between US and British forces, making them impossible to understand without.

Eventually the technology  known as the Voice Encoder became abbreviated into the “vocoder” we know and love.

Vocoder’s can currently be found in hardware synthesizers by Akai, Yamaha, Korg, and others. 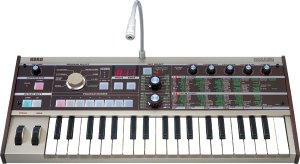 Virtual vocoders can be found native in Logic Pro, Reason, Cubase, Ableton and other DAWs.    Third-party plugin versions of vocoders are created by Waves, Arturia, and Native Instruments

For a tutorial on using the Logic EVOC 20 vocoder here’s a video I made:

Modern day artist Imogen Heap seems to often gets cited as a vocoder user.  But I’m not sure it’s a true vocoder.   She uses a TC Electronics Voice Live 2, which according to the manufacturer “often contains a vocoder type quality.”

Check out Laura Clapp giving a demo of this technology:

For further research:  check out NPR’s short but informative segment on “All Things considered”   http://www.npr.org/templates/story/story.php?storyId=126781688

Also check out Dave Tomkin’s excellent book “How to Wreck a Nice Beach:  The Vocoder from World War II to Hip-Hop, The Machine Speaks”

The creative production technique shared in this episode of the podcast will come in handy for producers of pop, electronic, rock, and other genres.

The end effect is an odd sound that crescendos out of nowhere into the original sound.   The “odd sound” contains all the sonic DNA of the target sound, so even though there is an unnatural quality initially, once the target sound is reached there is a sense of  retrospective resolution.

Remember;  the SPECIFICS of how you engineer this can vary in your situation/DAW.   If you keep the following steps in mind and understand them, you can do it a totally different way than the video example I give.

Remember a BUS allows you to record from one track to another in your audio software.   If you understand how to use a bus in this way, you should be able to do this effect without a problem.

The steps/recipe to form reverse reverb:

5  Print that sound WITH reverb as an audio file.   This is where you would use a BUS to record from one audio track to another.

Here’s a video example of creating the effect:

I hope this is a helpful trick for you!